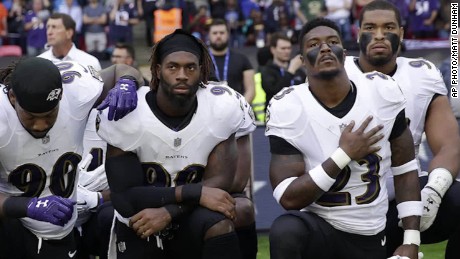 President Trump had this to say about professional athletes taking a knee during the National Anthem: “Wouldn’t you love to see one of these NFL owners, when somebody disrespects our flag, to say, ‘Get that son of a bitch off the field right now. Out! He’s fired. He’s fired!’”

What was the response? The Pittsburgh Steelers refused to take the field during the Anthem. Many of the Super Bowl champion New England Patriots took a knee. National Anthem singers at two separate games, Meghan Linsey and Rico Lavelle, took a knee while performing. The Oakland Athletics’ Bruce Maxwell, was the first baseball player to take a knee. Basketball star Steph Curry refused to attend the White House celebration for the NBA Champion Golden State Warriors.

The new cast of “Star Trek: Discovery” took a knee on their premiere night. The list goes on. The expressions of solidarity are incredible. Despite his absence on the field, the NFL Player’s Union awarded Kaepernick with the Week One MVP for his charity work. He recently donated $25,000 in the fight for DACA.

It is likely that the NFL owners are scrambling to find a way around slumping popularity to maintain their profit margins. Dallas Cowboys owner Jerry Jones originally loathed the kneeling protests, yet he linked arms with his players and took a knee before the national anthem during Monday Night Football on Sept. 25. The spectacular photo-op was a perfect way to begin blurring the lines between the original intent of Kaepernick’s protest and the owners’ self-interest.

League ratings continue to fall. The NFL boycott and player protest is working. Broadcasting stocks took a nosedive this week, a fall of between 1% and 8%. Trump attributed the low ratings to “new league rules” that penalize excessively hard tackles. This hyper-masculine explanation defies all scientific evidence of increased brain trauma among current and retired players. Recent discovery of one of the most severe case of Stage 3 Chronic Traumatic Encephalopathy (CTE) was found during an autopsy of Aaron Hernandez, who committed suicide while awaiting trial for murder charges.

Fans are turning away from the NFL because they are sick and tired of injustice. They want to stand in solidarity with Kaepernick. What does it mean for the working class when the president calls for the best paid workers to be fired for their political beliefs? He is signaling to employers everywhere that it is open season to fire workers for expressing their own unique ideas.

Is it unrealistic to consider an NFL player strike? The deepening political consciousness of professional athletes is opening an interesting arena in the class struggle. This includes a solidarity letter to Kaepernick penned by military veterans: “However you choose to use your voice, please do so with an understanding that many veterans do not condemn the protest of activists like Jackie Robinson, Colin Kaepernick and everyday Americans seeking justice. Indeed, we see no higher form of patriotism.”

The U.S. government pays millions to NFL owners to convene patriotic displays during games. It can be argued that the Pittsburgh Steelers’ not appearing on field during the “Star Spangled Banner” was a type of brief work stoppage or wildcat strike. The patriotic illusion is not successfully created when the players are not standing and saluting the flag.

Workers everywhere are getting a real lesson that the U.S. flag really represents police brutality, war, and the bosses’ profits. What could a player strike accomplish? It could quickly resolve Kaepernick’s status on the NFL owners’ blacklist and put an end to harassment by Trump and the bosses. A player strike could also build confidence in the working class and serve as a popular example for the power of mass collective struggle against the bosses.