On Martin Luther King Day, Jan. 16, over 5000 people marched to a street rally outside Philadelphia’s Bethel African Methodist Episcopal Church. The march was sponsored by a broad coalition of groups under the aegis of the MLK Day of Action and Resistance (MLK-DARE), which presented to the public its comprehensive declaration of principles as “a vision for a more equal and just America.”

The reason that the marchers assembled outside historic Mother Bethel was to mark a special occasion—the 200th anniversary of another rally at the same site. In January 1817, some 3000 people had gathered at the church to speak against efforts to expel free Black people from the United States and send them into exile in Africa.

In early 1816, Charles Fenton Mercer, a Federalist legislator in Virginia, initiated a campaign to convince the federal government to colonize Black people into a new state on the west coast of Africa. Mercer believed that Black people in this country, once they had been freed from slavery, would remain pauperized and discontented, and thus act as a constant destabilizing force in U.S. society.

It was an idea that some well-intentioned whites had raised before: Why not give American Blacks a fresh opportunity in Africa, where they could develop their skills unhindered by white prejudices, and at the same time bring Christianity and civilized values to the “untamed” continent? 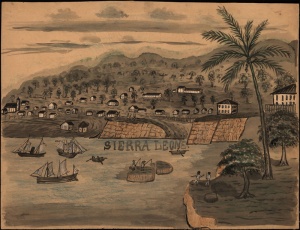 Sierra Leone was established as a British colony in 1786, and as a new “homeland” for impoverished Black people and ex-slaves under British protection. Americans founded the country of Liberia to the south.

Historian Gary B. Nash (“Forging Freedom”) sums up the motivations of Mercer and other white “reformers” who were attracted to the goals of the colonization movement: “White racial prejudice was permanently relegating free blacks to a degraded position, which was a contradiction of the entire credo of the republican ideology emanating from the American Revolution. Caught in such an impasse, white reformers chose to remove the object of white racism rather than combat racism itself.”

Mercer soon caught the ear of Robert Finley, a Presbyterian clergyman and director of the Princeton Theological Society. Finley developed a plan to establish the American Colonization Society (ASC), headquartered in the city of Washington, a location chosen to facilitate the task of lobbying members of Congress.

It was not long before a number of Southern slave-owning planters and politicians joined the ASC—and indeed, they became its principal leaders and proselytizers. This was evident at the founding conference of the society, on Dec. 21, 1816, in Washington City, where sessions were chaired by Kentucky Senator Henry Clay, a slaveholder. The newly elected president of the society was Bushrod Washington, nephew of the former president, and a slaveholder at the Mount Vernon estate.

Although the language of the ASC convention spoke of “ameliorating the condition of the free people of colour in the United States,” less glowing opinions were voiced by many delegates. This was seen in the positions of Robert Goodloe Harper, from Maryland, who wrote in 1817 that the growing number of free Blacks in his region were a “nuisance and burden,” “a degraded, idle, and vicious population.”

Southern planters saw free Black people as worse than a nuisance; their very existence as “free” labor served as a constant threat to the institution of slavery. “King Cotton” was becoming supreme as an export crop, and slavery was being extended to new U.S. territories in the Mississippi Valley and even further westward.

It had become evident to Black people at the time that, as the abolition movement steadily lost ground, white hostility to Blacks was rising in the North. What few rights they could count on, even elementary rights such as the right to congregate in public parks on holidays, were often removed.

Accordingly, many Black leaders were initially attracted to the goals of the Colonization Society. The image of a haven in a free Black-ruled republic (like Haiti) had great attraction. One strong supporter of the idea was Paul Cuffee, a New England merchant, ship owner, and sea captain of African and Native American parentage. As a political organizer, Cuffee used his ability to sail from port to port along the Eastern seaboard to spread the vision of “returning” to Africa.

At first, Philadelphia Black leader James Forten was drawn to Cuffee’s ideas. But the meeting at Mother Bethel Church—which he chaired—helped to steer him away from support to colonization after he observed one speaker after another denounce it.

Most Black families in the United States had lived here for generations and had no memory of the Africa of their ancestors. Most felt that they should have full rights in the very country that they had helped to build.

Soon, the role of white Southern slave owners in the American Colonization Society became clear to all. Moreover, not just a few Black Americans who had emigrated to western Africa (Sierra Leone and Liberia) found themselves in conflict with local peoples. And whole families died from diseases to which they had no immunity.

But as racism grew in the United States throughout the early 19th century, the idea of exiling the free Black population to a distant country continued to come to the surface.

Meeting of the American Colonization Society in the early 19th century.