So far, at least a few pamphlets are available for free download; the rest are priced to simply cover printing costs.

Basic Marxism: A selection of pamphlets explaining how socialists view the world.

Pamphlets published in 2016 include:

Pamphlets published in 2015 include:

• The Fight for Class and Climate Justice, by Bill Onasch and Carl Sack, $2

• The Politics of Revolutionary Socialism, by Jeff Mackler, $3

Pamphlets published in 2014 include:

• Ukraine in Turmoil, by Michael Schreiber and Jeff Mackler, $3

Pamphlets published in 2013 (not featured below) include:

• Revolution and Counter-Revolution in Egypt, by Jeff Mackler, $3

• Capitalism vs. Socialism, by Jeff Mackler, $3

“Capitalism Damns the Environment,” authored by Socialist Action environmental activists from across the United States, aims to refute every “solution” offered by capitalism’s protagonists and apologists to the effect that the global environment can be saved within the framework of the capitalist profit system. Employing a mass of scientific and economic data, the authors demonstrate the futility of “market-based solutions” propounded by the U.S. government and corporate establishment and its media. 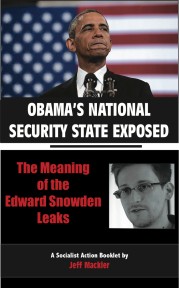 The May-June 2013 revelations by whistleblower Edward Snowden of U.S. secret surveillance operations have dramatically undermined the “democratic” image and credibility of the U.S. government around the world. Snowden, following in the tradition of WikiLeaks’ Julian Assange and Pfc. Chelsea Manning, released proof that the U.S. government’s criminal operations are inseparable from the functioning of the capitalist system itself.

This Socialist Action booklet details these operations while providing a historical overview of U.S. repression past and present. The example of a successful fightback against capitalist state power during the Vietnam War is also analyzed here and serves as an instructive example to activists that a defeat of capitalist repression and wars is not only possible but necessary for humanity’s future.

ARCHIVED PAMPHLETS. Contact us to see if items are still available for purchase: