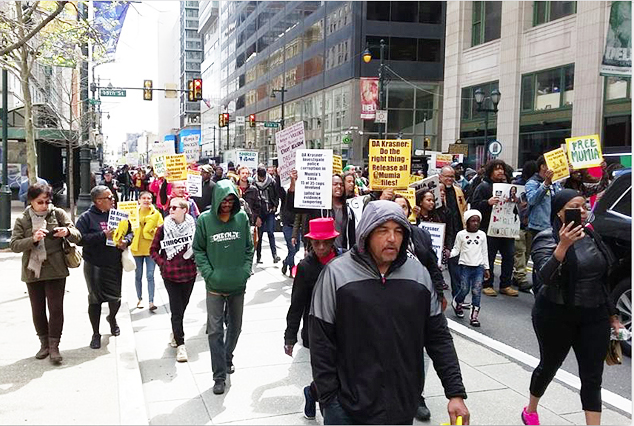 “Free Mumia!” marchers shout in Philadelphia on April 30, as court hearing reviews  aspects of the trial procedure used in the frame-up case against him. (Photo: John Leslie / Socialist Action)

Reprinted from the Philadelphia Inquirer (May 1, 2018).

I was stationed in Europe 37 years ago when I received the call that all black families dread. My little brother, Mumia Abu-Jamal, had been shot by the police and was fighting for his life.

Mumia was the kindest and gentlest of my five siblings. At the time, he had been working two jobs to support his wife and children and honing his distinctive voice as a radio journalist­. He was a rising star, and the pride of our family.

Dedicated to truth, Mumia used his radio show to expose police brutality, housing discrimination, and City Hall corruption. Philadelphia magazine had just heralded him as one of  “81 People to Watch” and Columbia University had given him the prestigious Major Armstrong Award for his radio editorial on the pope’s visit to Philadelphia.

Contemplating the painful reality of black life in America, I flew home immediately. I arrived to a bad situation. My brother lay unconscious, handcuffed to a hospital bed, and accused of killing Daniel Faulkner.

Faulkner was a white police officer; my brother a black man on the scene. It seemed that nothing else mattered.

The police labeled him a cop killer. Journalists and politicians buried his humanity. And Judge Albert F. Salbo — who, according to a 1992 Inquirer report, presided over 31 cases  that resulted in the imposition of the death penalty — convicted and sentenced him to death in the absence of material evidence.

The conflicting and recanted testimonies and absence of a motive didn’t matter. It didn’t matter that four witnesses told police that the shooter fled the scene. Nor did it matter that a Justice Department investigation had just concluded that the level of police corruption “shocks the conscience.”

Still, Mumia maintained his innocence. In 1995, an international movement stopped his state execution. In 2011, his death sentence was declared unconstitutional; and now a pending court order demanding that the DA release all the files in his case could open the path to his freedom.

In opposition, the officer’s widow, Maureen Faulkner, has asserted that the police are victims of the legal system and that the appellate process is a gravy train for criminals.

Yet, the incestuous nature of the District Attorney’s Office and appellate judges tells a different story. In Philly, prosecutors who convict defendants often become the judges who deny their appeals.

This miscarriage of justice brings Mumia to court Monday. He seeks relief on the basis of Williams v. Pennsylvania, where the Supreme Court ruled that one person, Ron Castille, should not be both prosecutor and judge in the same case.

I believe Castille double-dipped in Mumia’s case. Before he became a Pennsylvania Supreme Court justice, he was Philly’s district attorney. As such, Castille helped prosecute Mumia in the city’s most famous case. Later, as a judge, he denied Mumia’s appeal. In the 1990s, Mumia’s lawyers asked for Castille’s recusal. The judge had been funded and named Man of the Year by the Fraternal Order of Police (FOP), an organization invested in Mumia’s conviction and execution. He refused to recuse himself.

Despite these violations, Mrs. Faulkner is calling on elected officials to turn their backs on the constitution and block Mumia’s due process.

Our family empathizes with Mrs. Faulkner’s pain. But we regret that the police have manipulated her thirst for vengeance all these years in order to conceal the truth about who killed Officer Faulkner.

Photos taken by a freelance photographer, Pedro Polakoff, appear to show police cooking up the crime scene in Mumia’s case. In the photos, Officer James Forbes, who testified in court that he properly handled the two guns allegedly retrieved at the scene, is seen holding the weapons with bare hands.

In 1995, amidst another scandal of police corruption, then-District Attorney Lynne Abraham told the Legal Intelligencer that her office would “discard any cases where evidence surfaces that even one of the officers involved in an investigation lied in court or in written reports.”

We call on District Attorney Larry Krasner to honor his predecessors’ promise and stay true to his own pledge to right the wrongs of his office: Do your part to help free my brother, Mumia.

Keith Cook served 26 years in the Army and retired as a command sergeant major.