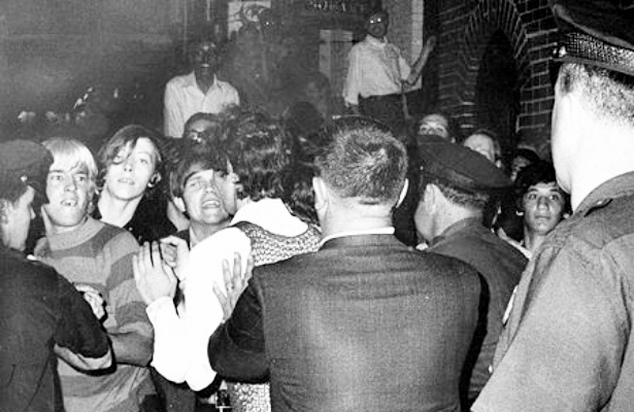 Almost two years ago, LGBTQ activists in New York City decided that the 50th anniversary of the Stonewall Rebellion was the time to start organizing to take Pride back from the corporations and return it to being the civil rights and liberation march it was in the past. For many in New York, the increasing attacks on our community are compounded by the increasing racism, sexism, and anti-Semitism throughout society.

Cities and towns across the country should all take note of what is happening in New York City and see it as a plan for all our Pride actions in the future. For the last 20 years, Pride in New York has been taken over by an organization called Heritage Of Pride (HOP). They have been criticized for the presence of corporate floats, campaigning politicians, uniformed police officers, and police restrictions like metal barricades on the route. No one can participate unless they are wearing an official wristband.

The Reclaim Pride Coalition (RPC) began meeting regularly and issued a press release: “Eschewing the corporate-saturated, highly policed nature of recent parades, the March is a truly grassroots action that mobilizes the community to address the many social and political battles that continue to be fought locally, nationally, and globally.”

This year will be different with a corporate parade and also a civil rights march. It will be people in the streets, no uniformed cops in the march, no corporate floats and universal access for everyone to join. Over 100 LGBTQI organizations have endorsed the march including the SEIU Lavender Caucus.

While there will be no confrontation between the two events, this will add power to the demand that HOP hand over to the community the Pride celebration next year. As Ann Northrup, an Act Up alum and major lesbian organizer of the march this year says, “It should be a community event, a people’s event, a pride event. This is the true spirit of what should be happening for Pride every year.”

In speaking with Northrup, she stated that while the march itself is being called “Queer Liberation March and Rally,” it is acknowledged that not everyone identifies as Queer. Everyone is welcome and  New York City’s lesbian, gay, bisexual, transgender and gender non-conforming communities have all been organizers of the march.

The march will begin at 9:30 a.m. on Sunday, June 30, and replicate the first New York march in 1970, which covered 51 blocks from Christopher Street to Central Park. The rally will be on Central Park’s Great Lawn.

At the press conference to announce the march route, Ellen Shumsky, an original member of the Gay Liberation Front and founder of Radicalesbians, talked about how the march this year will let her relive the pride and sense of community of the first march in 1970. “When I see the parades’s now—the Mardi Gras—and there are commercial floats and advertisements, it is upsetting and sickening. We’ve lost that feeling of the first march.”

This year will let everyone relive the pride and sense of community experienced in 1970 in the aftermath of the Stonewall Rebellion.